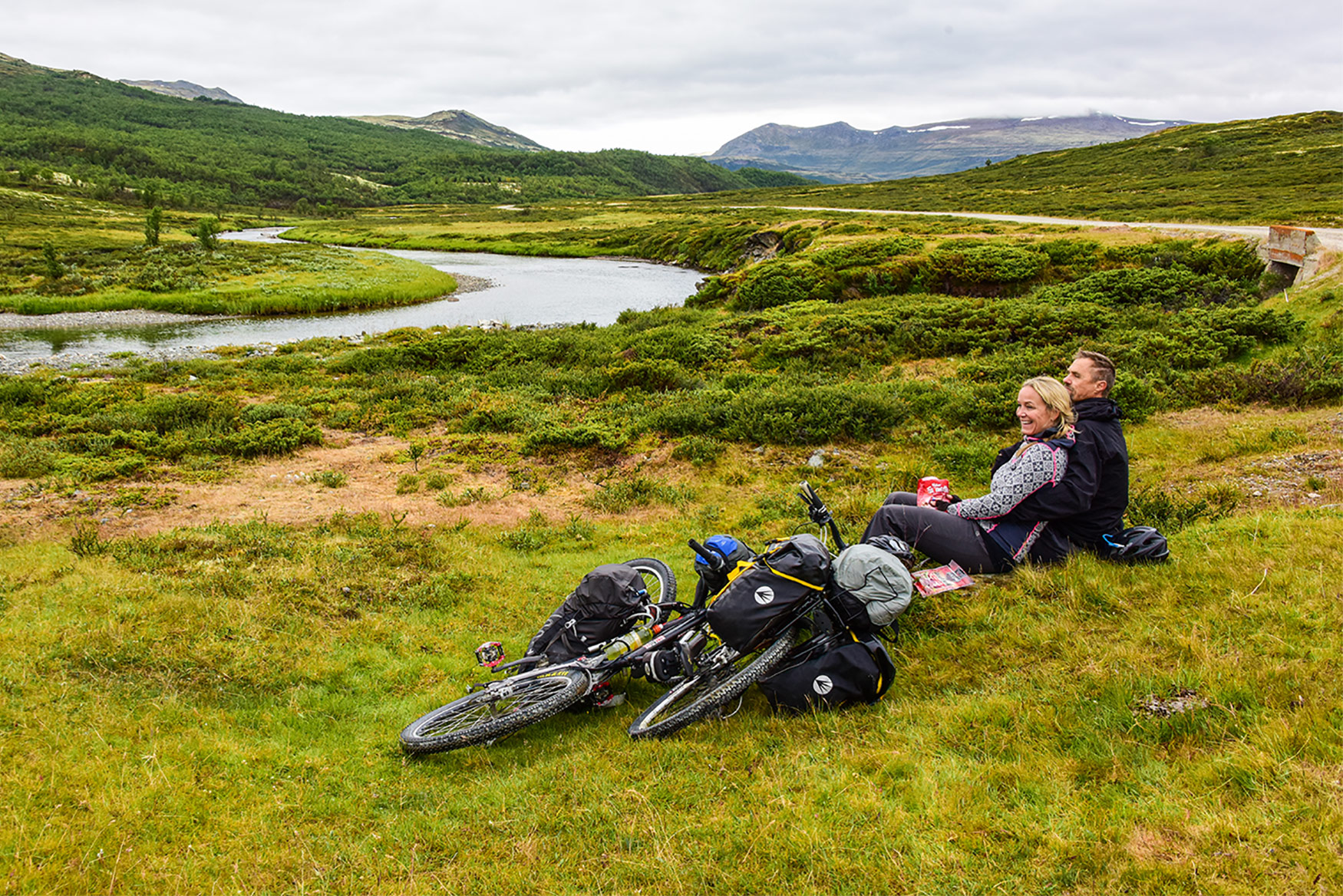 We’ve just got out of the car in the centre of Dombås, and the photographer has had a look at the map. Not least at the topography, where a dense mass of contour lines east of Dombås shows all too clearly what we are to expect. There’s no warm-up – it’s straight into the climb. Short and brutal. Three miles on and 1150 feet higher, we catch our breath at the top. From here the mountain plain is spread out like a carpet.

Out on the plains

“Painful backside? Just wait till tomorrow! No – the day after,” two pink-clad ladies with heavy trolleys behind their bikes call out. They will soon be completing their own round trip and are having a good laugh at us, who are just beginning. Because the worst is still to come.

But first – pure enjoyment. The Dovre mountain plateau between Dombås and Hjerkinn is almost as flat as a pancake, with small lakes to swim in alongside the cycle path, surrounded by distant high mountain peaks. This is the section of the tour that is most cycle-friendly.

The newly-built cycle route from Dombås to Hjerkinn opened in late Autumn 2017, running partly parallel with the E6 towards Trondheim. The road, though, is almost entirely out of view and we have the feeling on cycling out in the wilds.

The cycle route takes us through the Fokstumyra nature reserve, an important wetland area with nesting cranes and hen harriers, gregarious ruffs and a large colony of bluethroats. To the accompaniment of chattering birdsong, we pedal lightly across the marsh. It is flat, it is gentle and the sun is shining from a cloudless sky.

All the same, it is two hungry and exhausted cyclists who stop at Furuhaugli well through the day. It is only three hours since we started, but breakfast was quite a few hours ago.

So it is a good thing when owners Jo André Hagen and Lina Kayser offers a tasty lunch.

The next stretch onwards towards Hjerkinn is relatively flat. On the opposite side of the valley, the Dovrefjell-Sunndalsfjella National Park is spread out across the foothills. That’s where we’re heading to tomorrow, in order to meet the famous musk oxen.

“It was the local authority that decided on the cycle route, and they’ve been dealing with it for many years,” says our hostess Anne Stine Hjerkinn Ekre at Hjerkinn Mountain Lodge and Mountain Riding Centre.

“So we’ve been looking forward expectantly for a long time. It’s not difficult, either! I cycled along it from Fokserød last year together with the kids, before the track was quite finished, and it went very well. After all, it’s good and flat up here on the mountain – it’s the stretch up from Dombås that is the steep bit,” she says.

The next day we are sitting outside the lovely red and white building – which has been offering hospitality to travellers for 1200 years! Anne Stine’s family has been running the place for 13 generations. Hjerkinn is a good home in which to rest your legs for a day while you make use of the canoes there and take an outing to meet the famous musk oxen.

Dovrefjell is the best place in the whole of Europe to see musk oxen in their natural environment. These highlands are home to about 350 of the animals; the long-haired, ragged animals like it best when it is cold and the wind is howling. Now, in mid-summer, it is really too warm for them.
The animals are spread over a large area, and nobody knows exactly where they are. So it is a real safari! We tramp across marshes and round bushes for a couple of hours before catching sight of these majestic animals. When we do find them, we maintain a respectful 200-yard distance, for the musk ox can reach over 70 stone and run at nearly 40 miles an hour. Nor are they particularly partial to visitors.

If you don’t want a long walk you can stop off at the architecturally-impressive Snøhetta Viewpoint, from where you can fairly often see musk oxen going past down in the valley.

–  “How are the thighs doing this morning?” I ask the photographer over breakfast.

“Weary,” he mumbles into his coffee.

“Good thing it’s downhill all day, then,” I comfort him.

Mercifully ignorant of the extent of my misjudgement.

Today we are back on the saddle. In principle, the route from Hjerkinn to Folldal follows a tarmac road, but Anne Stine recommends a short-cut through the Hjerkinnholen nature reserve. Which turns out to be a lovely choice, along open paths through a beautiful forest and marsh landscape.

Half-way to Folldal, we turn off along a side path to Galleri Slåen – a unique place with a gallery in an agricultural building from 1750, with curious artwork inside and out and Norway’s best rhubarb pie on offer, with locally-made cranberry soda. Heavenly!

“Some of the artists are local, while others are from all over Norway. I am most interested in the art itself, and would like a gallery full to the brim with humour, colour and joy, because that’s what we need,” says the colourful owner Kari Åsheim.

It’s a bit impractical to take porcelain with us on our cycle trip, but Kari sends items all over the country.

Every six miles you should take a break, according to Anne Stine, so after another dozen miles we pedal along a turn-off to the Folldal mines. Folldal is a little piece of Norwegian history and is one of 15 plants in the Norwegian Directorate for Cultural Heritage’s conservation programme for technical and industrial heritage.

Mining was carried out here as early as the mid-18th century, and this cornerstone business subsequently formed the basis of the development of the Folldal community and that of the local areas.

Nowadays, old and young alike can get a taste of what life was like as a miner. A little train takes us 600 yards into the mountain, where the air is heavy and the atmosphere damp. The work was difficult and dangerous; the mine workings were prone to collapse and the men’s health was often poor. We are fortunate to be able to drive out again after a half-hour tour: rarely has it felt so good to get back outside into the sunlight!

Strictly speaking, our route should take us straight to Folldal and the road into the Grimsdalen valley. But once more Anne Stine has tipped us off about a “short cut” over the mountain, which turns out to involve a climb of a thousand feet. Tarmac gives way to gravel, which in turn becomes just a path.

It is well through the day when two pairs of weary thighs reach the highest point. But all our efforts are rewarded: if I had to make the choice all over again there’s no way on earth I would have taken the main road!

A gorgeous little gravel track stretches across the plain, and when after a while we round a small hill and look straight out across the majestic Rondane mountains at sunset it is as though the sweat and lactic acid are blown away from our legs. Talk about a national romantic image! In this spirit it seems very appropriate that we are to spend the night at a 200-year-old restored mountain pasture farm.

The mileometer reads 26 miles, and we fall into bed before the clock strikes 10.

Yesterday gave us a bite of the national romantic apple; today we get to eat the rest, core included. The Grimsdalen valley is among the most beautiful and most significant of Norway’s summer-pasture valleys, and includes a number of well-preserved agricultural sites. We cycle along gravel tracks in the valley bottom, following a dried-out river bed. The Dovre National Park lies on one side; Rondane on the other. The hills blossom with an ancient farming landscape, and we regularly pass lovely old summer-pasture farms with crooked fences and silver-worn timbers.

Ancient round burial mounds stick up higgledy-piggledy like outsized molehills in the valley bottom. About half-way along the valley, just exactly at lunchtime, we can cycle up to the only bit of civilisation in the whole valley – the Norwegian Tourist Association’s Grimsdalshytta cabin. Sour-cream porridge and cured meats provide fuel for weary cyclists.

From here it is 25 miles back to the car at Dombås. The route out of the Grimsdalen valley follows a good, broad gravel track, while the actual journey back up across the mountain to Dovre goes as well as can be expected. From there it is an easy run on the old road up to Dombås.

Four days and three national parks by bike – they have been 80 distinctly beautiful and feature-full miles. Next year we’ll do it by electric bike.

Some of the text has been edited. Read the original article here

A fantastic trip between three national parks!
Information and booking >

Our traditional places of accommodation ensure a great stay!
Get to know the locals >

Get to know Dovre 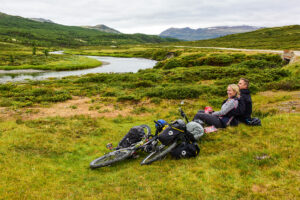 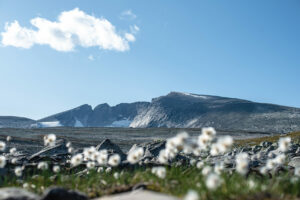 The Queen of Dovrefjell

Get the latest news

Sign up to receive our newsletter
PrevPreviousThe Queen of Dovrefjell

We give you the best experiences in Dovre, at Dovrefjell and in Rondane

Get the latest news